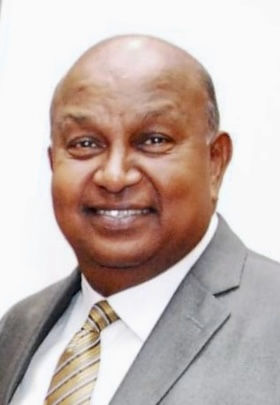 A Tribute in Honor of the Contributions of Dr. Michael I Osuri to SAAA.

Mike represents the second generation of Adventists from Southern Asia who came to the U.S. with great expectations and full of optimism. Optimism is a trait that I found in Mike from the first time we became friends in Spicer Secondary School, where we both studied. This positivity and outgoing personality was exhibited in everything that he did – in studies, in sports, in his profession, in his social life, with his family and with his church.

Michael was born in Narsapur to Pastor Osuri Israel and Krupavarthy David. He is the third of their four children – Dr. Joan Dass (late), Gentry, Michael and Leela. Since the age of 5, he lived in Poona. He studied at the Salisbury Park Elementary School, Spicer Secondary School and College, where he met his future bride Swinitha. They were married in May, 1969. Just a few months later, leaving his young bride, he came to the US on September 1, 1969 on a student visa, with the help of his brother Gentry and sister Joan. Swinitha joined Mike in Takoma Park on December 10, 1969.

Michael and Swinitha’s family expanded with the arrival of their first born, Sameel, in 1973. Then came Sanjeev in 1977 and Manoj in 1980. Now all married with children. Theirs is a close-knit family with devoted spouses and 7 adorable grandchildren.

Michael’s training in theology, and pastoral experience in Madras, prepared him as he pursued higher education in the US, leading to a doctorate from GWU in Counseling Psychology. His career included private clinical practice in mental health and leadership of a facility for emotionally disturbed youth.

Both Michael and Swinitha have noted that their adaptation to their new life in America was enhanced by the friends and family who were bonded together by fellowship and events of SAAA. Soon they both participated in its activities and were integral to its growth and positive influence it had on the community.

In 1985 when our Association had organized a building committee for the construction of our future worship and fellowship hall, Michael was one of the seven members appointed. Such a project is an intimidating endeavor but he took an active role in supporting and raising funds for the project. He leveraged his education, skill and experience to aid the Association toward achieving its goals.
He led in many of SAAA activities and programs. His outgoing personality, and enthusiastic optimism has enabled him to bring together different groups of Adventist Southern Asians on different occasions. This was most evident as he was instrumental in organizing the Southern Asia Day Celebrations in 1996, with a commemorative book, Our Family Our Journey Our Story; which brought together the various organizations of Southern Asians, in celebration and praise to God for His leading of this community in the U.S. He was the Chairman of the Board of SAAA at that time. He continued to be supportive of the mission and goals of SAAA, supporting the leadership in all its activities, including camps, monthly meetings, and the building project.

In the recent past, as Chairman of the Bylaws Review Committee, Michael and his team did an outstanding job to eventually complete the review, amend its bylaws and have The Board approve them, effective September 2014. Prior to completing the amended bylaws, SAAA was in a challenging and tumultuous time. As President of SAAA, 2014-2015, Michael was able to reach out again to others, to join in SAAA activities and mission.

He encouraged a focus on community care projects and initiated the “Five Two Fund” (Five Loaves of Bread and Two Fish). He supported projects to help feed the homeless and support refugees who were in dire need of care. It included providing food, winter clothes, and cash to the needy during Thanksgiving and Christmas holidays.

Dr. Michael Osuri has been one of the pillars of the Southern Asia Adventist Association. His efforts have helped the association and is surely appreciated by all its members and well-wishers. We owe him a great debt of gratitude for his years of support and inspiration; his spirituality, warmth, and humanity.

Krupavaram Meesarapu was born in Nuzvid to Mr. & Mrs. Jacob and Kantharathnamma Meesarapu. Mr. Jacob was a first generation Adventist parents, converted and baptized by the Missionary Dr. T. R. Flaiz. After completing college in India he worked as an Accountant at GMH and at South India Union in Bangalore. Krupavaram married Clara Ninala, who also was born to a first generation Adventists. Krupavaram and Clara are blessed with three children, Praveen, Preethie, and Malini, and six lovely grandchildren. The family immigrated to Toronto Canada, in 1974 and later migrated to the USA in 1978.

Krupavaram and his family joined the SAAA in 1980. Krupavaram served the SAAA in various leadership roles. In 1985, while serving as the Treasurer, he incorporated the SAAA with the state of Maryland and subsequently obtained 501 C3 Tax-Exempt Status from the IRS. Through the years Krupavaram has served SAAA as President, Vice-President, Camp Director, and Board Member. Krupavaram later served as the Chairman of the Board and guided the SAAA during its difficult times as well as during its Golden Jubilee year..

Krupavaram holds a Bachelor's degree in Business Administration from Spicer Memorial College, an MBA Degree from Andrews University, and the CPA Certificate from the District of Columbia.

SAAA is a non-profit organization which was informally organized in 1961 by a group of Seventh-day Adventist immigrants from the countries of India, Pakistan, Sri Lanka (formerly Ceylon) and Myanmar (formerly Burma).